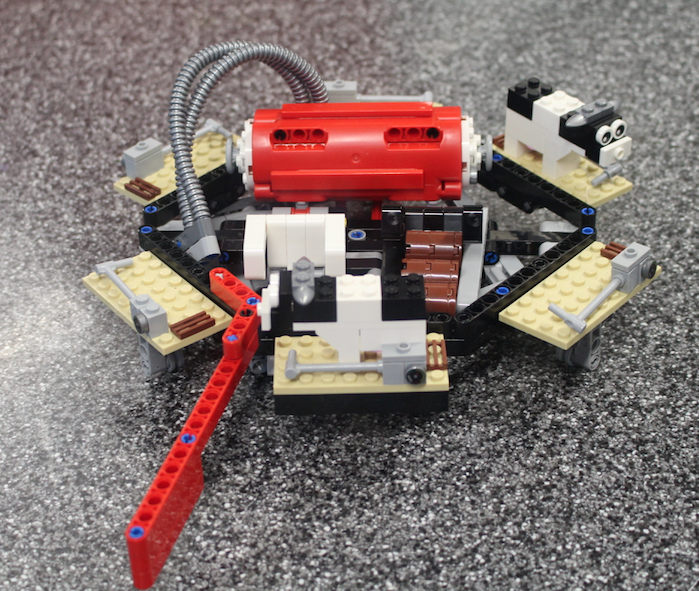 The competition themed ‘Animal Allies’ required students to not only build, program and challenge their robots but also produce a presentation exploring problems that occur when animals and humans interact.

The students won a trophy for their research into their project called ‘Exploding Sheep’ also know as sheep bloat.

Miss Louise Oliver said ‘the research topic had to be related to human and animal problems. One of the student’s grandfathers is a sheep farmer, he told them about how the pellet food the sheep eat is highly processed and causes them to bloat. The students then came up with solutions and conducted experiments using hydrochloric acid that exploded when mixed with water in a bag to represent the food reacting in sheep’s stomach.’

Student also spend the day competing against other schools in a variety of challenges using the Lego robots they built and programed during their after school club.

The competition aims to be tons of fun and help students learn how to apply science, technology, engineering, and math concepts (STEM).

Year 9 Student, Aishmeen said ‘the competition was really fun and very interesting. It was been a real learning experience. We got to share our project and skills with other students and now we feel a lot more prepared for next year.’

This is the first Lego competition that the students have been involved in since Miss Oliver and Mr Paul Foster set the group up in September. Miss Oliver said ‘One of the parents at the school suggested that we entered the competition. He is a STEM representative for his company that offered to provide the funding for us to enter the competition.

‘It’s been brilliant seeing all the children from the different schools work together and share their skills. This is definitely a competition that we will be taking part in next year. We are currently arranging to meet up with other schools in the Trust that took part.’

Year 9 student Anna said ‘I thought the challenge was really interesting and we learnt a lot of practical and life skills such as teamwork and listening to others.’

‘Joining the club has been really insightful and opened my mind. Some of my friends dragged me to the club and if I am honest I thought it was going to be boring. But after a few weeks of attending the club and seeing these tiny blocks become amazing creations, I developed a love for it and passion for building. I have been sharing the progress of our projects on social media and some have received in the region of 450 views.’

Lego club runs every Friday after school from 3.30-4.30pm for any students wishing to get involved.