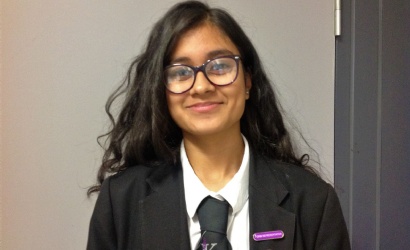 Well done to KSA student Samia Sheik who will represent Great Britain in a chess competition in Peru next year.

Samia was named ‘Top Girl’ in her age category in the Delancey UK Schools Chess Challenge after competing in the recent Terafinals and she also came first in her 13/14 year age category and third in the adult category in another recent competition.

Her mum and brother taught her to play the game aged seven and, just a year later, she won the world championship in her gender and age category in Dubai. Samia, from Year 10, said: ‘I like playing chess because it is all about problem solving. I enjoy finding out more about different strategies and challenging other people. I play in all competitions including girls only, mixed and adult competitions.

‘People from all over the country take part in the tournaments so although I do some times play games against the same people there are different challenges every single match. The fastest time I have won in is a bullet game, which lasts for just a minute, but I won in 25 seconds!

‘I train online by watching videos. From there I analyse mistakes I made in my previous games and I learn from those so I am quite analytical. I still play against my brother and mum but I tend to beat them! I balance my chess and my schoolwork and eventually I would like to become a doctor.’