Our students hear the sky’s the limit! 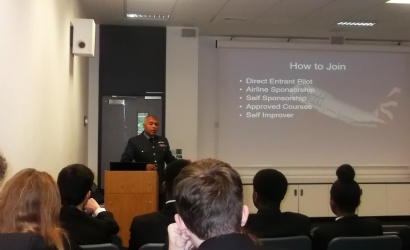 Being an airline pilot can be a glamorous, exciting, and a highly rewarding job taking many years of training and dedication to secure a career within this sector.

Despite that, it did not deter over 20 students in Years 11 and 12 at Kettering Science Academy who wanted to know more about routes to becoming a pilot.

Julie Thompson, Careers Leader at KSA, contacted a national organisation, who in turn introduced Dheeraj Bhasin MBE, a local pilot who visited the school to share his experiences.

His wide-ranging career includes being a Royal Air Force officer, a fast jet pilot and flying instructor and, more recently, flying as a long haul commercial pilot with British Airways. His love for flying started at just 16 years old. He went to air shows, joined the air cadets, a University Air Squadron, and now is a member of the RAF Reserves and societies including the Honourable Company of Air Pilots and the Air League.

His  informative presentation highlighted a number of ways in which the students could access this incredible career. Mr Bhasin talked about the qualifications needed, training, selection process and employment opportunities in aviation.

Ms Thompson said: ‘His enthusiasm and passion were evident and his talk certainly inspired the students. He also brought in some equipment to show students and spoke to individuals during one to one sessions in the library. Mr Bhasin definitely excited many of our students who can now see this as a potential career pathway for them. Thanks to him for taking the time to share his knowledge and expertise in such a lively and informative way.'