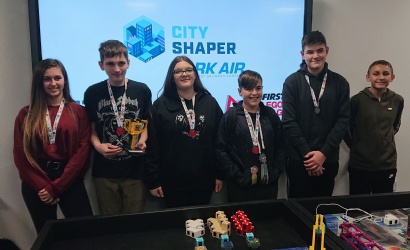 This was a regional event with approximately 15 teams competing to represent the East Midlands in the National Final being held in Bristol in March.

The teams had to design and build a robot that was capable of completing a series of tasks, such as moving Lego buildings from one place to another, operating a Lego crane, climbing a bridge and setting a swing in motion. They also had to research an urban problem and offer a solution in a presentation to the judges.

The KSA team called themselves SPRUCE (Stop Parkers Recklessly Using Corners or Entrances), as their project was concerned with tackling inconsiderate and dangerous parking especially around schools, on the pavements along narrow streets and blocking corners and designated crossing zones for users of prams, pushchairs, wheelchairs and mobility scooters.

The team researched parking legislation and priced up the cost of placing bollards in and around Kettering to prevent cars parking in certain places that cause most difficulty to pedestrians. In addition, marks were awarded for Teamwork, Core Values, Robot Design and other tasks completed throughout the day.

Although KSA did not win the overall competition, they were awarded a trophy for their efforts throughout the day. All the students had a great day out and were excellent ambassadors for the school.