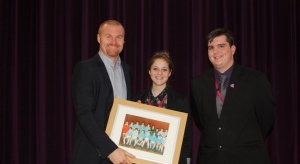 It was an incredible evening, with the Academy lucky enough to have former student and now successful Championship manager Sean Dyche as the guest speaker.

The Burnley manager whose team are current favourites to be promoted to the Premiership this year, spoke about his local roots where his passion for football began. He also talked about the qualities needed to be a success.

During an inspirational ten-minute speech Mr Dyche said: "Sitting here before me I see lots of talented young people.

"But you will need more than just talent if you are really going to achieve. You are going to need all of the old fashioned values such as passion, pride, dedication, respect and honesty and a great attitude to everything."

Paying tribute to Jim Hoover, who founded Ise Lodge Football club where he played as a youngster, he said: "Jim used to say that a great attitude is everything. Even at a young age that meant something to me. You have got to be willing to try hard. Success does not just come to you, you have to go and get it."

The awards evening was held to celebrate more than 70 students. All students who had 100 percent attendance were given certificates and there were individual awards across different subjects for outstanding students. In addition, there were awards for charity efforts, individual projects and the spirit of KSA.

Ryan Ollett returned from his studies at a drama school in London to collect the award for Post 16 Performing Arts.

He said: "The love of drama was definitely nurtured while I was here at the school. I performed in many school productions and had some fantastic teachers. I now hope to go on to become a West End performer."

Karolina Zeissel won the Post 16 English award. Karolina, who is now studying investment at the City University London, said: "This award makes me feel honoured and rewarded. It is very special."

Abi Kaphur who won the Outstanding GCSE achievement award, is now studying biology, chemistry, physics and history at A level. She said: "It is great to be recognised. I was not sure which award I had won and to win this award is just incredible."

He said: "It is really important to have awards evenings like these. We talk to our students constantly about how important it is to achieve and to aspire, but it would mean nothing if we did not recognise great achievement."

Each student went home with a glass award and there are also a new collection of trophies that will now sit in a special cabinet in the Academy.

At the end of the evening Mr Dyche was presented with a framed photograph of himself in the Henry Gotch Football team.

View a gallery of photos.