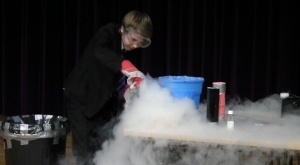 Some of the mysteries of science were explained to Year 9s at a special physics roadshow designed to encourage more students to choose the subject at GCSE level.

Peter Tiktin, a teaching and learning coach from the Institute of Physics, staged 'Ever Wondered Why?' which comprised a series of dramatic experiments.

He demonstrated how different chlorides dissolved in alcohol have different coloured flames and explained that scientists can work out what chemicals a star is made up of by looking at its colour spectrum. Mr Tiktin also showed how liquid nitrogen can be used to make ice-cream and how the effects of spinning can transform a small flame into a tunnel, similar to the workings of a tornado.

Students were also impressed with the dramatic flame produced by burning alcohol vapour.

Mr Tiktin, who is a former physics teacher at Brooke Weston Academy and now a member of KSA's governing body, has been working with the Academy to increase the uptake of physics at both GCSE and A level, particularly amongst girls. He works closely with staff to deliver training in the teaching of physics and also spends a morning a week teaching physics to Year 11 and runs a drop-in session for Year 13s.

Mr Tiktin said: "'Ever Wondered Why?' is a crash, bang, wallop workshop designed simply to encourage Year 9s to consider physics as an option. It's about giving students an idea of what physicists do, what a great job it can be and how much money they can earn."