An Increase in Higher Grades for A Level Students

The number of A*-B grades achieved by A Level students at Kettering Science Academy has almost doubled over the last two years.

The number of A*-B grades achieved by A Level students at Kettering Science Academy has almost doubled over the last two years.
The A Levels results and pass rate at the Academy has been on the increase since 2012 with a 94% pass rate being recorded at the school for this year.
This summer, 37% of the grades achieved by students were A*-B, with A* marks awarded in subjects including maths, further maths and the sciences.
This year’s AS Level results are also on the rise with an increase in the pass rate to 81%, with students being awarded more A*-B grades than ever before. Overall at AS Level there has been a significant increase in the number of students who have passed two or more of their examinations.
These figures look set to increase in the future too with the number of students signing up to the Sixth Form at the Academy being on the up; it is expected to reach a total of 200 by 2015.
Principal at Kettering Science Academy, Paul Davies said: “We are more than pleased by the A Level results and AS Level grades as well as the pass rate in the higher grades. These results reflect the dedication, hard work, aspiration and commitment of the students, the quality teaching of our staff and the continued support of our families.
“We are also pleased to report that all our students know the next pathway they are embarking on, whether they are going to university, apprenticeships, employment or the armed forces. They have earned their success today and we wish them all the best for the future.”
Assistant Vice Principal for Sixth Form, Jane Watson, said: “We’ve had some outstanding results again this year from our students and they have exceeded their targets and worked extremely hard to gain these higher grades. “Students are highly aspirational and are striving to get in to the best universities in the country, including one student who has secured his place at Cambridge University. We are really pleased that based on these grades they are being offered such great life chances and opportunities going forward.” 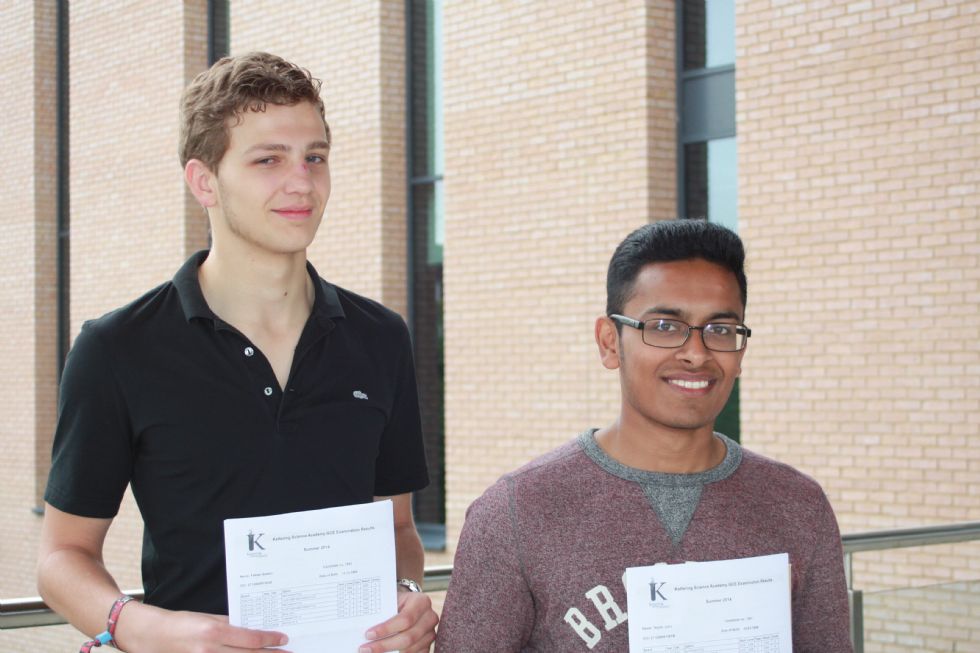 Notable top achievers include Fabien Sutton who is going to Cambridge University to study natural sciences he gained one A* in maths and four As in the sciences and maths.
Fabien said: “I was quite shocked and overwhelmed by my grades I have secured my place at Cambridge University to study science which I am delighted about.
“In the future I would like to go into a career in research. The teachers at KSA have been fantastic and very supportive, as have fellow students in the sixth form. I am very pleased for my fellow students’ achievements as well.”
Tesvin John was another top performer, achieving an A* in maths and As in further maths and physics. He also received two Bs at AS Level in chemistry and resistant materials.
Tesvin said: “I had hoped I would do well but I wasn’t expecting to get such good grades. I have secured a place at my first choice of university, Southampton to study mechanical engineering.
“In the future I hope to work for a Formula One racing team. I realise it is a competitive industry but I know Southampton is a great university to study at for taking this career path. Adrian Newey, head of design at Red Bull F1 racing team studied there and I hope to follow in his footsteps. ”