A former Kettering Science Academy student is setting her sights on competing in the Rio Olympics after a great athletics season at national level.

A former Kettering Science Academy student is setting her sights on competing in the Rio Olympics after a great athletics season at national level.
Sprint Hurdler, Lucy Hatton has had a successful summer of track events, achieved Personal Best times and now she is keen to train hard to secure her place at the next Olympic Games. 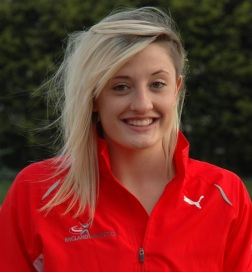 Lucy, 19, who trains with Corby Athletics Club, this summer came second at the Sainsbury’s British Championships in Birmingham, with a new Personal Best of 13.20 finishing just behind Olympic Bronze Medallist, Tiffany Porter.
Lucy said: “It was a definite highlight for me completing in the Under 23s section. There was a false start and I had a hard first part of the race, so I was really pleased to come away with a medal.”
She added: “I am always looking to improve on my times. I am now aiming to achieve a time of under 13 seconds and I will be training now for the next few months in preparation for taking part in the next series of indoor events.”
Since leaving KSA, after completing Year 11, Lucy has been working hard on her fitness and alongside her training she is studying Criminology at the University of Leicester.  At the end of the month she will be starting her second year.
Lucy said she has fond memories of KSA, she said: “I found staff and my friends at the school fantastic and very supportive.
“The PE department were especially supportive, but I did also enjoy English and History lessons. I was more than pleased with my B and C grades for English that I achieved at GCSE level.”
Lucy now plans to finish her second year at university before taking a year out from her studies to become a full-time athlete in preparation for the Rio Olympic Games.
She said: “I have had some great experiences as an athlete. I enjoy travelling to the various places to take part in the sporting events as well as competing alongside well-known and experienced athletes. I love being an athlete and I would not change a thing about my current lifestyle.”