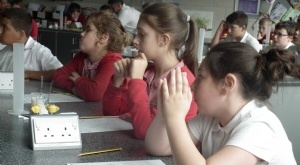 Visiting primary school pupils have been learning more about science with lessons at KSA.

Visiting primary school pupils have been learning more about science with lessons at KSA.
Last Thursday, 18th September a group of Year 5 and Year 6 pupils from Loddington School spent the afternoon in the Secondary Phase’s science department and learnt all about micro-organisms.
Pupils were asked to think about micro-organisms in regard to the transfer of germs when it comes to the transmitting viruses like the most recent spread of Ebola in West Africa and back in history to the spread of the plague.
The pupils were then asked to think about most common uses of micro-organisms in the processing of making some foods including yoghurts, cheese and bread.
KSA Science Teacher, Mrs Louise Oliver, firstly led the class in a practical experiment to see how fast yeast increased the volume of the pupil’s bread mixture.
Pupils worked in groups and measured out their bread making ingredients before adding the yeast and pouring it into a measuring cylinder.
The children then recorded the increased volume of the mixture, after leaving it for various amounts of times, into a table and later produced a chart of their findings.
The pupils from Loddington were the first group of visitors to the science department. In the coming weeks the secondary phase will be welcoming pupils in from other primary schools including KSA’s Primary Phase, St Mary’s and Millbrook.