Colleagues at KSA who completed a 10k walk for charity are keen to encourage more people to join them at the event next year.

Colleagues at KSA who completed a 10k walk for charity are keen to encourage more people to join them at the event next year.
On Saturday, 13th September, Vice Principal, Mrs Justine Mitchell- Bunce and Safeguarding Co-ordinator, Mrs Deborah Thomas took part in the Walk Ten event at Boughton House.
They joined more than a thousand other walkers on the charity stroll around the grounds of the Boughton estate in aid of Marie Curie Nurses. 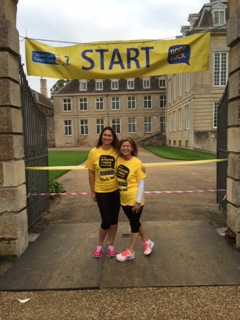 Mrs Mitchell- Bunce said: “It was a really good event and there was a great atmosphere. We took one hour and 30 minutes to complete it and it was very enjoyable.
“We would definitely like to take part in the event again and would like to do it another year as part of a bigger group and encourage staff and students to take part from the Academy.”
She said: “After the walk we had a picnic in the grounds and were treated to a firework display. A spokesperson for Marie Curie also spoke at the event about the work of the nurses, who care for terminally ill patients.”
Both colleagues would like to thank everyone at the Academy for all their support for the walk and for their generous donations.
Currently, they have jointly raised more than £150 in aid of Marie Curie Nurses.