Praise Given To Cadets 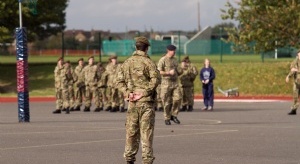 Praise has been given to Brooke Weston Trust students who are taking part in the Combined Cadet Force programme at Oundle School including two Kettering Science Academy students.

Praise has been given to Brooke Weston Trust students who are taking part in the Combined Cadet Force programme at Oundle School including two Kettering Science Academy students.
Year 10 students, Daisy Blisset and George Clark are amongst the 22 Trust cadets taking part in the cadet programme.
The KSA students embarked on the programme with fellow cadets from the Trust schools in September and they have joined forces with 128 cadets from Oundle School.
They now meet on a weekly basis for operational platoon training.
During the weekly sessions the cadets have been taking part in operational activities including: safe weapon handling, drills, map reading, tactical manoeuvres and hands on activities with Oundle Fire station cadet’s from the school’s sixth form.
On Sunday, 21st September cadets also took part in their first field operation and they had a day of training which included building a shelter, cooking with ration packs, moving tactically as a group and setting up ambushes.
Pastoral Care Officer at KSA and lead staff member for the CCF, Mr Andrew Howell said: “Their drill is progressing well and the schools should be proud of the standard they set. We have also received a letter from Oundle School commending our Cadets on their progress in the programme so far.”
In the letter from H Roberts Major OC APC and Contingent Second in Command at Oundle School stated there has been an excellent start to the cadet programme between the Brooke Weston Trust and Oundle School.
Major Roberts also commended the attitude and conduct of the cadets as well as their interaction with each other.
Brooke Weston staff were also thanked for their contribution to the training programme so far.