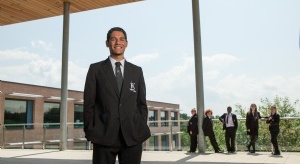 Students at KSA’s Secondary Phase have been awarded ePraise points from the beginning of last half term and some have already reached their first milestone awards.

Students at KSA’s Secondary Phase have been awarded ePraise points from the beginning of last half term and some have already reached their first milestone awards.
The on-line awards system was introduced at the beginning of the academic year in September and students have been working hard to collect individual and collective form points from their teachers and other members of staff.
Students have been earning points in class for examples of good behaviour, for assignments and coursework and for examples of good conduct.
Pastoral Support for Year 11 , Mrs Hazel Dodd said: “It is a great system which is working well for the students and staff .Our students have been awarded epraise points by staff for achievement, effort and participation. It is encouraging a healthy competitiveness between students, their houses and between form groups.
“The on-line system is not only accessible by the staff to monitor students’ progress, but can also be viewed by parents to monitor their child’s progress and see what points they have been awarded, by which member of staff, when and what the points were rewarded for.”
Student and form leader boards showing the top point scorers individually and collective can also be viewed on the ePraise website.
Mrs Dodd added: “The rewards system is working well for us and students have welcomed the rewarding of points towards the goals/milestones of Emerald, Bronze, Silver, Gold and Platinum shields."

To reach the milestone awards students need to achieve the following:

Seven students have been awarded their emerald shield for gaining more than 150 points. They are:


For the latest points and more information about epraise visit the website at www.epraise.co.uk