A Year 11 Student at Kettering Science Academy was called up to stand guard at a Royal Visit to the county yesterday.

A Year 11 Student at Kettering Science Academy was called up to stand guard at a Royal Visit to the county yesterday.
Myles Tew, who has been appointed as a cadet to the Lord Lieutenant in Northamptonshire was contacted to be present at his first royal engagement on Wednesday, 3rd December as HRH The Duke of Kent visited the county.
Myles was asked to be present at the second part of the Duke of Kent’s visit to the Warner Edwards distillery in Harrington and he was accompanied by his dad, Mr Paul Tew. 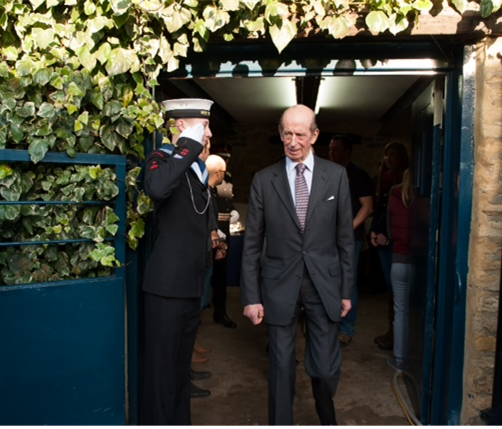 Mr Tew explained: “Myles was the only cadet to Lord Lieutenant in attendance at this section of the royal visit. As the duke arrived and left his vehicle, Myles’ role was to stand to attention and hold his salute throughout his visit to the distillery.”
He added: “It was Myles that led the proceedings with the salute and the bodyguards for the visit asked that he did not drop his guard at any time and he controlled his salute strong throughout.
I was extremely proud of him. I don't know how Myles held his cool, I was 30 feet away from the proceedings and my tummy had butterflies!”

After the royal visit Myles was given his own private tour of the distillery by the owners.
Mr Tew added: “On the way home in the car Myles said that the afternoon had been one of the best days of his life.”