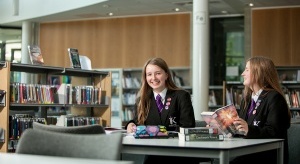 Year 9 Students were the latest Year Group to be quizzed by Sixth Formers part of a series of questioning sessions organised by Kettering Science Academy’s Library Committee members.

Year 9 Students were the latest Year Group to be quizzed by Sixth Formers part of a series of questioning sessions being organised by Kettering Science Academy’s Library Committee members.
Just before the end of last term, Year 9 students were challenged in house/form groups to answer 20 questions on the subject of love and Valentine’s Day.
The varied set of questions had been collated by the Library Committee students at KSA made up of a group of Sixth Form Students.
The Sixth Formers had researched the questions which ranged from historical facts on romance to multiple choice questions on people’s buying habits for Valentine’s Day.
Teams of three and four students took part in the quiz and the winners were an all boy team,Da Vinci A, who won with a score of 15 correct answers and were presented with sweets for a prize.
The Year 9 quiz results were as follows: Socrates A 12 points, Socrates B 13 points, Franklin A 14 points, Da Vinci A 15 points, Hawkins A 14 points and Hawkins B 10 points
Head Librarian for KSA, Mrs Heidi Economou said: “The aim of the library committee’s quizzes is to challenge the students to think about answering a variety of questions and to also create some friendly competition between forms/house groups. It also provides a new role for the library committee members, allowing them to engage with fellow students and help to create a new fun use for the library space.”
She added: “The students who attended were really good and seemed to enjoy themselves.”
Library committee member, Kieran Tapp said: “We enjoy putting together the quizzes. We use a variety of resources including the internet to come up with the range of questions and it is interesting to see how well the students do.”
Another year group will be invited to take part in another quiz in the library soon.