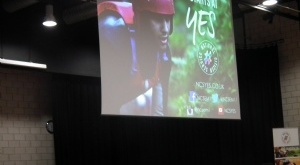 Year 11 Students at Kettering Science Academy were introduced to the opportunities available to them through the Northamptonshire National Citizen Service.

Year 11 Students at Kettering Science Academy were introduced to the opportunities available to them through the Northamptonshire National Citizen Service.
Nigel Anderson from UFA, a national education charity involved with the funding of NCS, visited the Academy on Tuesday, 24th February to promote the benefits of  the skills programme to the students in an assembly during CAPS time.
Mr Anderson explained there are 800 spaces for students in the county to take part in the government funded community skills scheme and he wanted to encourage KSA students to express an interest in the varying opportunities being made available to them, during the six weeks school holidays in July.
Mr Anderson said: “It gives you something to look forward to after finishing your GCSEs and the skills you will gain will increase your employability in the future.”
He also outlined the other great benefits and life skills to be gained from signing up,  including the help it gives to creating a varied CV and personal statement and it is a recognised award scheme by UCAS, when applying for a university place in the future.
Forms were handed out to students after the presentation allowing them to register their interest in the three week summer activity/skills courses starting on 13thJuly, 20th July, 27th July or 3rd August.
Some students showed a keen interest on the day and were given further forms to fill in to apply for a place.
Mr Anderson explained places were filling up fast and for applications to be submitted sooner rather than later.
For more information visit the website at: http://www.ncsem1.org.uk
Completed ‘Expression of Interest Forms’  for the NCS summer events can be posted into a postbox in Mrs Hazel Dodd’s office or posted back to the address on the forms.