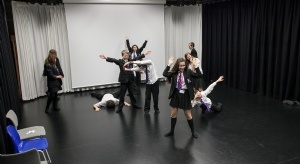 Budding actors are being offered the opportunity to achieve acting qualifications through classes being run as an extra-curricular activity at Kettering Science Academy.

Budding actors are being offered the opportunity to achieve acting qualifications through classes being run as an extra-curricular activity at Kettering Science Academy.
This term, KSA drama teacher, Mrs Amanda Doherty is running LAMDA acting sessions to enable students to achieve extra grades in drama.
The grades the students can work towards are being awarded by the London Academy of Music and Dramatic Art, which is a well established, renowned and highly respected organisation of dramatic art.
Head of Drama at The Academy, Miss Julia Mallard said: “The qualifications would be completely outside of the work students do in normal lessons and would be completed as an extra-curricular activity. LAMDA Graded Examinations in Performance Acting are designed to develop the skills necessary to communicate dramatic text to an audience. Students will be working at different grades based on their ability and will be put forward for formal examination with a LAMDA registered examiner. The grading of the exams are very similar to grades earned for musical instrument exams and offer the students the opportunity to excel in acting.”
Miss Mallard added: “For students who are put into the Level 3 examinations (Grade 6-8) there is the opportunity to convert their grades into UCAS points towards university applications in the future.”
Students from Year 7 through to Year 13 are welcome to attend. Any interested students are being asked to speak to Mrs Doherty or Miss Mallard for more details.
LAMDA Acting sessions take place on Wednesdays after school in the Drama Studio.