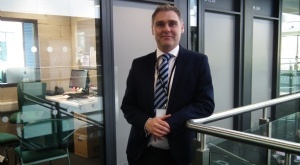 Mr Simon Anderson is Kettering Science Academy’s newest Vice Principal and he is keen to raise students' aspirations through his role within the Secondary Phase.

Mr Simon Anderson is Kettering Science Academy’s newest Vice Principal and he is keen to raise students' aspirations through his role within the Secondary Phase.
Mr Anderson joined the Academy at the start of May and he said all is going well, after being at the school for three weeks.
Mr Anderson has always been in teaching and has worked his way up from being a NQT, after graduating with a teaching degree in English and History at Browns College, Oxford to then going on to study for his Masters at Cambridge University.
His previous role, before joining the senior leadership team at KSA, was Assistant Head at Stratton Upper School in Biggleswade, Bedfordshire.
Mr Anderson said as part of his work at Stratton he was involved with looking at achievement and student progress, as well as raising aspirations of students, which is similar to his new job.

He said: “My main role at Kettering Science Academy is the overseeing of the English department, raising the standards, working on the curriculum and looking at the CIAG [Careers Information, Advice and Guidance] options. I will also be the line manager for the PE department.”
He added: “I am looking forward to getting my teeth into something new and I will be looking to raise standards and aspirations across the board.
“I am really happy to be here at this exciting time at the school, especially after just having an Ofsted inspection and awaiting the results of that report. I am settling in well and I am enjoying getting to know the students and staff. I am also looking forward to working on my ongoing work within the English department for the future progress of students.”