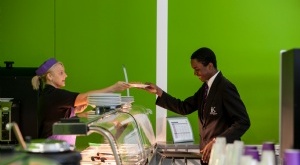 The catering facilities at KSA have been shortlisted for a county food and drink award for providing healthy eating choices.

The catering facilities at KSA have been shortlisted for a county food and drink award for providing healthy eating choices.
The Academy’s on-site catering provision has been named as one of four finalists in the running for a Carlsberg UK Northamptonshire Food and Drink Award for 2015/16.
It was announced on Tuesday that the school’s catering team were in the running for the award of ‘Healthy Eating Workplace’ in the sport, health and education category, sponsored by Northamptonshire County Council. The winner will be revealed next month at a ceremony in Northampton.
Catering Manager for KSA, Mr Alan Sewell said: “We were nominated to be considered for the award by one of our suppliers, Bookers. We were asked to initially provide information about the food we serve and how we look at providing a healthy choice of meals for our staff and students within the Academy.
“We provided evidence and showed organisers of the contest our menus and meal deals as well as our approach to encouraging healthy eating. We then received a visit from the judges.”
Mr Sewell said: “As a team we feel really proud to have been selected as a finalist and we are all eagerly awaiting the judges’ final decision. We have worked hard for the past three years at the Academy to introduce the healthy menus in line with the Government's School Food Standards guidelines. Our successes include providing more healthy hot meals at the school.”
Mr Sewell has been invited to attend the food and drinks awards’ ceremony on Thursday, 15th October at the Royal and Derngate Theatre, when the winners will be announced.