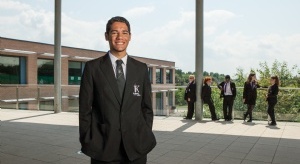 The Academy has received high praise for both the Primary and Secondary phases from the Chief Inspector for Ofsted following the school’s last inspection in May.

The Academy has received high praise for both the Primary and Secondary phases from the Chief Inspector for Ofsted following the school’s last inspection in May.
In a personal letter sent to KSA Principal, Mr Paul Davies and Head Teacher of the Primary Phase, Mrs Jo Fallowell; the Chief Inspector Sir Michael Wilshaw said he was pleased to read the recent Ofsted report and to see that the leadership and management of the academy were judged as ‘good’.
In the letter, Sir Michael Wilshaw stated: “The report makes it clear that your actions are having a significant impact and that the academy is improving rapidly. I am pleased to read that you have set out clear priorities for improving the quality of teaching and the behaviour of the pupils. As a consequence, provision in both the Early Years and the Sixth Form is now good.”
He added: “It is positive that you offer extensive training and support for leaders and teachers. This has enabled subject leaders to check on teachers’ work and also to provide them with good support. As a result of your efforts, I note that pupils’ achievement is now improving quickly. Importantly, disadvantaged pupils are now catching up with peers.”
To sign off with, he said: “Your ambition and strong leadership will be crucial to Kettering Science Academy making the necessary journey from requires improvement to good. I wish you well for the future and look forward to writing again to congratulate you and the academy on further progress.”
Mr Paul Davies said: “Both Mrs Fallowell and I were thrilled to receive this letter on behalf of Kettering Science Academy.  It is further validation that we are doing all the right things, I have never heard of a school receiving a personal letter from the Head of Ofsted before.”