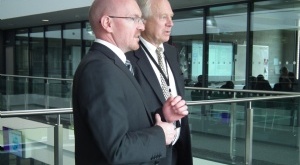 The Academy was honoured to receive a visit from the Lord Lieutenant for Northamptonshire on Tuesday, 6th October, who took a valid interest in the future vision for the school.

The Academy was honoured to receive a visit from the Lord Lieutenant for Northamptonshire on Tuesday, 6th October, who took a valid interest in the future vision for the school.
Mr David Laing, who was appointed by the Queen to be the Lord Lieutenant for the county in June 2014, spent time with the members of the Brooke Weston Trust and Academy’s Senior Leadership Team before receiving a tour of the Academy with KSA Principal, Mr Paul Davies.
During the walk around the Academy, Mr Laing commented on the look and the layout of the building, but he also commended the way all the students he saw were engaged in their lessons and were not distracted by his presence as a visitor.
Mr Davies explained about the vision for the future of KSA and how senior staff members and teaching staff are working together to transform the Academy and about the action already being taken to make the necessary improvements suggested by the Ofsted Inspection in May.
Mr Laing stated he was impressed by the school as a whole and he believed that the school is on the right path to making a difference to allow it to be rated ‘good’ overall by Ofsted in the near future.
At the end of his visit the Lord Lieutenant said: “Six months ago I went to Corby Business Academy and I wanted to see another Academy in the area and I chose to look around Kettering Science Academy as a school on the improvements path. I can already tell the Academy is well on its way to the top and firmly on the improvements road.”
He added: “During my visit to the school I was thrilled to see how engaged both staff and students are during lessons and I would encourage all parents to come here to see the Academy for themselves.”
KSA Principal, Paul Davies was delighted that Lord Lieutenant took time out from his incredibly busy schedule to tour the Academy and said: “It is wonderful to be in a position where we can show visitors all the really good things that are happening within the Academy.  Our staff and students work tirelessly every day to create a really positive learning environment and I’m proud that this is reflected in what the Lord Lieutenant saw on his visit.  I would like to extend an invitation to all current and prospective parents to contact us and participate in one of our tours so they can see the Academy during a normal school day.”