More than 30 students recently went on an Academy trip to France and visited Normandy and Paris.

More than 30 students recently went on an Academy trip to France and visited Normandy and Paris.
A group of Year 8 and 9 Students went on the residential visit to Château Beaumont, an education, language and activity centre situated in Southern Normandy, from Sunday 18th to Thursday 22nd October.
During the visit the students followed Le Grand Weekend programme, which is designed to give the students an opportunity to experience the history, culture and language through a variety of excursions.
On the first day the group visited the Mulberry Harbour of Arromanche, the Normandy Landing beaches, the Bunkers of Longues-Sur-Mer and the Bayeux tapestry, finishing with the WWII British cemetery of War in Bayeux.
On day two they visited a French market in Laval, where students had the opportunity to sample and purchase local produce. In the afternoon students visited the 13th Century Castle of Fougères, showing students an example of contemporary architecture to the Bayeux Tapestry and ended the day with a visit to the factory of the world renowned Montbana chocolates.

On the final day they went on a tour of Paris taking in the sights including the Jardin de Tuileries, a visit to the Louvres Museum, the Eiffel Tower and the Arc de Triomphe. The tour ended with a shopping trip on the Champs-Elysées and dinner at a steak house.
Also during the trip they travelled by boat along the River Seine and sampled some of the local cuisine including frogs legs. 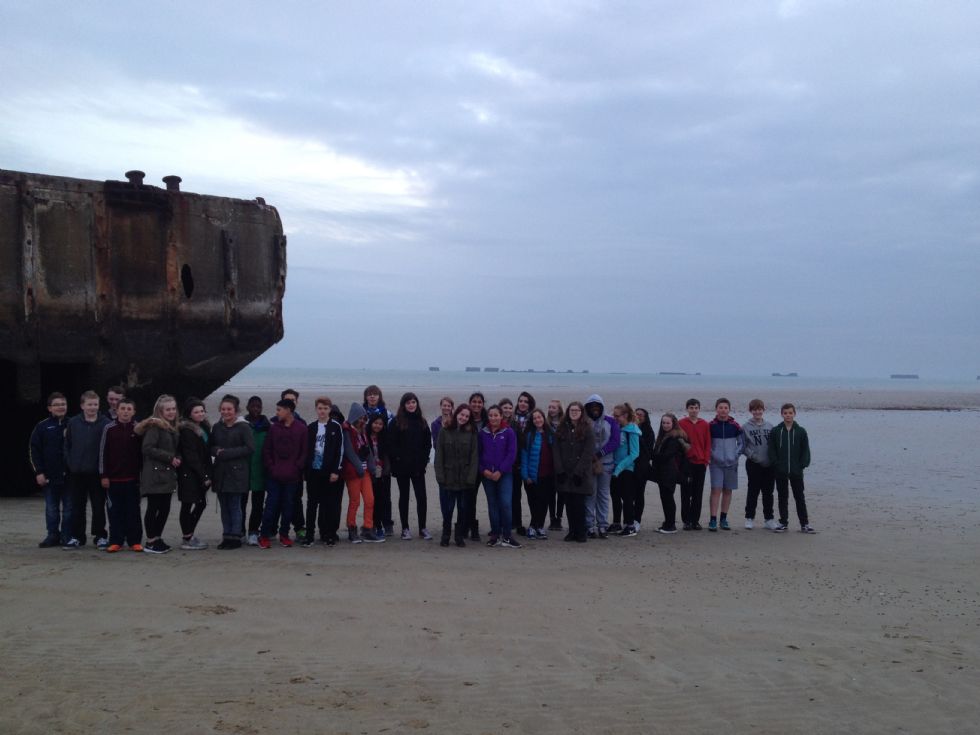 Trip Leader and second in the Modern Foreign Language department at Kettering Science Academy, Mrs Anne Reeve-Mavrommatis said:  “It was a great opportunity for students to experience everything that is only possible through complete immersion and to understand what it means to be a dual-linguist with application and acquisition of language, and developing a notion of what it means to share a European identity through past, recent and present history and they made the most of it.  At the Chateau students met French children on English as a second language holiday, they shared a few basketball games and we joined them and completed a quiz together, some students shared personal details and are in touch with them, forging the beginnings of lifelong relationships. It was the first time that KSA travelled to Paris and it was the highlight of the trip for many students who stated they had waited since early childhood to see the Eiffel Tower.
“Overall, students were a credit to their parents and KSA, behaviour was impeccable and I was praised by many people for having such a well-behaved and interested group of students. We all had a great time.”

Students' accounts of their trip experiences: