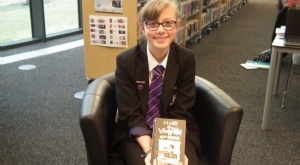 The winner and runners up have been announced for the secondary phase library’s comic story competition.

The winner and runners up have been announced for the Secondary Phase library’s comic story competition.
Year 8 Student, Mia Williams won the first prize of the new Diary of The Wimpy Kid book - ‘Old School’ for her imaginative comic strip.
All the competition entries were judged by the Head of the art department, Mr Matthew Bean.
Mr Bean said: “Mia’s entry was chosen as the winner as her comic story is visually exciting and tactile.”
Mia said she was happy and surprised to win. She added: “I look forward to reading the new Diary of a Wimpy Kid book and I know my brother would like to read it too. I am really pleased to have won."
The second and third place runners up were students from Thomas Clarkson Academy, Rugile Lipavicit and Skye Stagg. The 2nd place entry was chosen for the student's interesting narrative and the third place student's comic story was chosen for a good use of cartoon-strip connections.
The winners of the Diary of a Wimpy Kid word search were KSA students: Year 8 Student, Jordan Sanford and Sixth Former, Lisa Mteki.