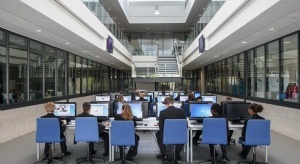 A computer coding club is being re-launched this term for students in Years 7 to 9.

A computer coding club is being relaunched this term for students in Years 7 to 9.
Students are be given the opportunity to learn about computer programming at an after school club  being run on Wednesdays.
The programming club will be taken by the Head of ICT and Business, Mr Daniel Duncan who is keen to encourage students with an interest in coding and computer programming to attend the club.
Mr Duncan explained: “The Coding club is being offered to students allowing them to learn about the fundamentals of coding using a programming language called Python. They will develop skills to help them construct logical programs with an end goal.”
He added: “We had a great response to the club last term from boys and girls and we hope the same interest will be shown for its relaunch this term.”

For more information about the coding club email Mr Duncan on: DDuncan@ketteringscienceacademy.org